THE GREAT DEVIATION’s first performance took place on the upper floor of a former Barrack house in Hohenlockstedt (today’s Arthur Boskamp-Stiftung building). The floors are old wooden panels that creak when you walk on them. There are six green-framed windows in the room, three facing west and three facing east. Half of the room (the North side, which also acts as the stage) is occupied by an assortment of props and objects, furniture and texts. They stood at various heights and distances from each other, but almost all of them face the Southern entrance of the room. They included: Two masks made of rope and paint, which hung on wooden stands, a macramé tapestry hanging delicately in the North-East corner, a large backdrop depicting a rendition of Arthur Boskamp’s “Don Quixote” painting (revised to depict the night rather than the day, and now includes the “Sitting Gods” Constellation in its sky), three framed prints nailed into the backdrop, a little television playing (with audio) a clip from a BBC documentary on ‘weaver birds’ , AND one hammock made of rope that is decorated with paint, and which hangs in the very middle of the room. The room was lit with spotlights, subsequently creating an ornate shadow beneath the swinging hammock. It was September, and the sun was setting. The central window on the west side of the room was open. The play was in one act, and it was narrated by THE MAN OF ALL TIME, played by Anna Szaflarski. Play books can be purchased at www.akvberlin.com

The Great Deviation - a play

Welcome Ladies and Gentlemen! In a moment we will begin the presentation of THE GREAT DEVIATION, written by Anna Szaflarski, and starring Alexander Hempel as THE MAN OF ALL TIME. The duration of the presentation will be approximately 20 minutes, during which I ask the audience to grant the stage its imagination. Without further delay, I introduce to you, THE GREAT DEVIATION!

The room is quiet. Lights change,
THE MAN OF ALL TIME enters from the NW corner.

The day was passing towards nightfall and THE STRANGER found himself dead tired and hungry. When looking around for comfort to refresh himself and relieve his sore wants, he perceived the HANGING MATT as a welcome star guiding him to the portals, if not the palaces of his redemption; and quickening his pace he reached it just as night was settling in. 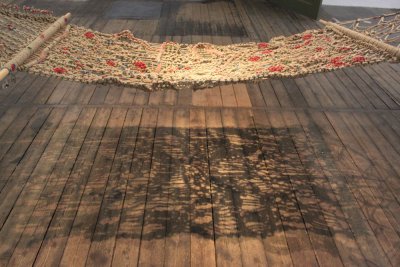 Hands were put to rest, the eyes were allowed to wander; wander into the far reaches of the socket. THE STRANGER had been lying in the hammock for sometime that evening before his demons began to badger him. THE BEAUTIFUL WOMAN , THE BEARDED MAN , THE SITTING GODS and YOUNG SOCRATES .

They had been there while THE STRANGER worked and walked, paced and laboured, all the time pulling his mind to and fro, but now he had inevitably, if not willingly, entered into the demons’ home. Into the mountains of La Mancha.

That’s where THE STRANGER had first encountered the SITTING GODS. Such inactive gods had he never encountered before. Their mere inactivity is what interested him so much. “Are there not wars to be overseen, loves to be brought together, deaths to be escorted?” The stranger asked. The Gods yawned at his narrow mind. They saw no purpose in standing anymore. Their legs had grown so tired from standing for millennia over their minions; who were never convinced by their wisdom and who went on with things as always. And so the gods finally realized that most of what they could do now could be accomplished from the sitting position. And sat they did, in the most comfortable lazy-boy sofas , and ergonomic office chairs; lacking in aesthetic where they gained in practicality. And that was a long time ago. Long before anyone had uncovered procrastination.

Should I go on?

“I greatly wished that you did.” He pleaded.

THE SITTING GODS on the deserted hills of La Mancha. Such a desolate and useless place is rarely experienced. Mountains are normally the landscape of great inspiration; their peaks, their monstrosity, their all-together greatness, but these had nothing of the sort. They are mundane as the passing of cars, or the ticking of the clock.

THE MAN OF ALL TIME pushes the hammock again.

Ah, the sun had stepped even further down the tunnel of the evening. And our STRANGER has passed the threshold of his captors. Should I tell you about the beautiful blond woman? She was and will always be a creature of great fascination. But to speak of her now would be rather rash.

“Exactly so,” YOUNG SOCRATES butted in.

THE BEARDED MAN was from his time as well. [Gesturing to YOUNG SOCRATES]. They shared their childhood, and when present he would always divert YOUNG SOCRATES from what horrible blunders might occur, but simultaneously never urge him on. A critical friend, a protective friend, but never a very supportive one, I should think.

It is said that a dialogue between two minds is a spiritual exercise, does the same apply for a monologue? How much does the other have to say for it to count as a dialogue? Does a dialogue demand that each participant have equal parts?

Oh who knows, and who cares. THE BEARDED MAN never did…

Oh I’m very sorry I must have trailed off somewhere.

THE MAN OF ALL TIME pushes the hammock again

Hear us speak,
because we have wisdom beyond your grandest
imagination!
Don’t let agonizing questions of possibility arise!
Do as we say, and you will surely avoid demise!

THE MAN OF ALL TIME begins to doubt his memory

… Rest peacefully and let Fate deliver your prize,
being too honourable will only bring despise…

And then they ended with something like: “Trust us we know, or take our words for it”… or something along those lines.

With this THE STRANGER began to worry. How could he balance courage and modesty without bringing about despise. Should he, like the gods, from now on remain seated and meek?

Ah, this is where the beautiful woman appears. She emerged from the ground below the mountains; she was 18 and worked part-time as a waitress at Kelsey’s. Her face glowed in the light of the SITTING GODS and her beauty became clear to the STRANGER.

THE MAN OF ALL TIME approaches and points to the tapestry

You may notice here that on the left side she is grinning with malice as if she is saying, “dear Stranger, you are lost, do not listen to those invalid fools.” She put her finger to her lips, as you see here. Her eyes closed with contentment as the stranger looked away from the gods and turned to her. 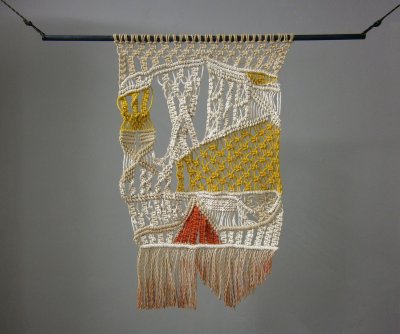 “What they forget is that a man lives and breathes his work, and ought to put everything into his work if he’s worth his salt” she told her prey while her hair burned with expectation. She went on with her demands and the Stranger hung on each of her words, “Tomorrow you will forget you were here, you will join the army, get a desk job, weed the garden, you will make your bed, count your change, act arrogantly but embody middle class, you will save people who need saving, you will go jogging and entertain people.”

THE STRANGER could not stop staring at her lips as she spoke, a perfect heart shape that so delicately ebbed as the words came out of them. THE STRANGER delighted in how her nose twitched with every point she made. He had but surrendered completely to her when the BEARDED MAN appeared again.

“Certainly he could not,” YOUNG SOCRATES debated.

But it was true, and as he approached his furrowed brow now created alternating symbols of various orders as he spoke,
“Beware!” he began, “the untempered disciplined nature may at first bloom and strengthen, but it at last bursts forth into downright madness!”

The beautiful woman only looked on while she twirled her fingers around her glowing hair. THE STRANGER was still captivated by her, and she knew it very well.

A short pause. THE MAN OF ALL TIME pushes the hammock again

At this juncture I would like to tell you about a somewhat related story.

THE MAN OF ALL TIME sits on a stool 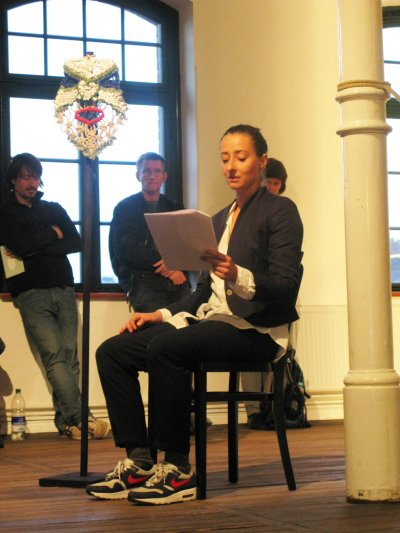 There was a man who received word that he would be needed to carry out a mission to defend his village against the oncoming invading armies. So that evening he went out as he was told and attached explosives all along the under-side of a bridge that spanned the gap of the bordering river. He did his job well and confidently. If he was completely alone, I don’t know. When he was finished, he packed his tools and headed home to wait for his next command. In the first hours of day break, a message came to him, how, I don’t know, if it was by telegram by soldier, or by spirit, that is not known to me. But the message came and he was sent to return to the bridge to explode it before the armies attempted to cross. When the man approached his destination he crouched in the grass and looked on with disbelief. Thousands of men were already crossing the river, but they moved like cattle and ignored the ingenuity or purpose of the bridge and plowed directly through the waters. It was at this moment that the man realized that he was one man. Who would be so silly to send one man to face an army?

Two days later tragic news came from the neighbouring village. There they had succeeded in exploding their bridge, and were punished for their resistance. Their houses were burned to the ground.

You will notice that the arms of the hatted man who sits on his donkey here, reach up to the sky. It appears that he is calling to THE SITTING GODS; that he pleads with them. His donkey conversely, hangs his head to the ground, avoiding the world. But they are bound by service and duty to the blue horseman, who is clearly a madman. The hatted man depicts desperation, while his mount clear resignation, but they are violently forced together by this saddle. If the hatted man would only give his remaining hope to his donkey, and the donkey his sense of reality to his rider they would collapse into the horizontal plane, where neither pro-activity nor inactivity is needed. This way they may still accomplish a sensible harmony. But instead they live here in perpetual discomfort and struggle.

THE MAN OF ALL TIME pushes the hammock

It is night now. We return to the mountains of La Mancha where the demons gathered to debate to THE STRANGER before he fell deeper into sleep and too far from their reaches.

THE SITTING GODS reclined and swiveled in their modern seats, and tapped their lips with their fingers, contemplating their next words. “Take a look at the bumble bee, the worker ant, or the weaver bird, they work frantically to build their temples…” but before finishing, THE BEAUTIFUL WOMAN began to fake convulse with sarcastic laughs. THE BEARDED MAN tried to rein in the conversation, “now think of what happens with the more courageous natures, Are they not always inciting their country to go to war, owing to their excessive love of the military life and either utterly ruining their native-land or enslaving and subjecting it to its foes?”

THE BEAUTIFUL WOMAN pushed the BEARDED MAN aside and twirled her fingers around her hair, and flirtingly chewed her gum with her mouth open. “Go on and make something of yourself worth looking at. Come back when you’ve killed someone, or built something important.”

...And the voice of YOUNG SOCRATES could be barely heard saying, “What a cruel fate!...” as the STRANGER slipped into the void of darkness.